While we have no idea why she wants to go all the way out to the desert we applaud her for her motivation to give fellow desert campers something to do out there in that boring expanse of nothingness.

In fact Kristen has been so amazingly prolific she has sent us two art proposals both of which the BPAF art review committee has considered worthy of award. 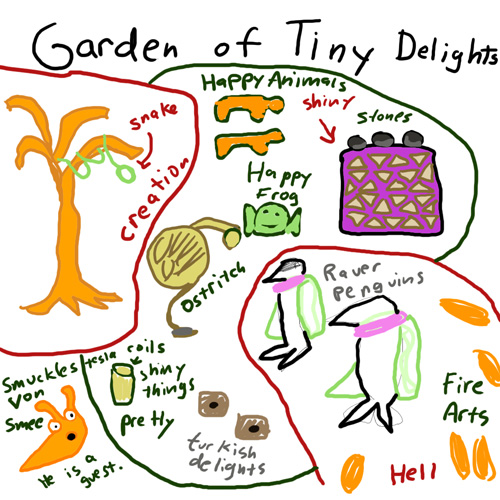 We gotcher Tree of Knowledge, made of shiny foil + a pipe cleaner snake, some sort of crazy middle arena which is basically heaven on earth and containing fantastical animals and some turkish delight (but don't eat it because who knows whether that material is toxic), and over on the right there'll be your hellish fire arts and raver penguins who took it just TOO FAR. Is it a metaphor for the danger of hedonism? Or a wondrous image of paradise lost? YOU BE THE JUDGE! 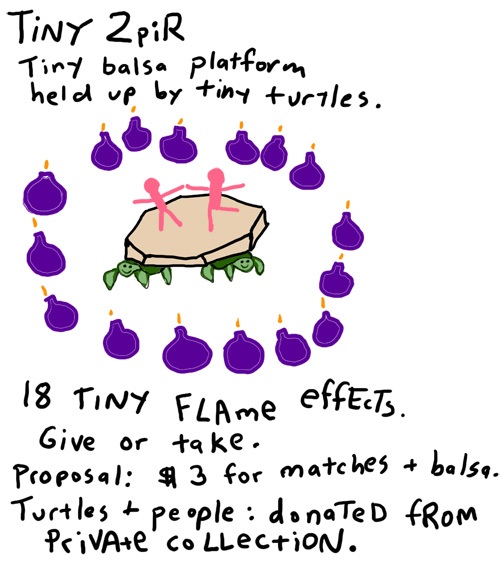 Tiny 2piR. Because we need fire art at the regional! Note: colors may be swapped out at the last minute.

Congratulations Kristen! For your Garden of Tiny Delights we grant you one dollar per exhibit, which totals $9 as Smuckles doesn't count since he is a guest. For your Tiny 2piR, we award your full grant request of $3.

UPDATE: Kristen has already begun working on her fine art projects! See photo of 2piR a one of the raver penguins at the Regional Tiny Temple.