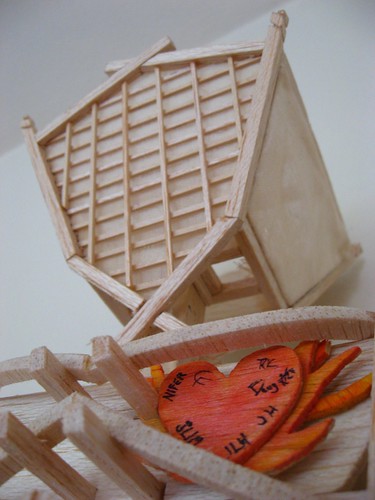 After one solid weekend of work and another late weeknight, the Balsa Man has been built! There are a number of improvements to the man this year. Most noticeably, the ribs and the circles on the arms and legs which are much more regular and smooth thanks the new scroll saw which was a recent addition to the Balsa Man workshop. Also new this year in the workshop are the saw horses which were built by SFSlim. There are also several little touches that we were able to accomplish due to the increased size of the Balsa Man KCrew.

And lastly there is the beautiful heart that was created by SparkleBottom and signed by every member of the Balsa Man KCrew.

We photo documented the build and have a Flickr Balsa Build 2009 photo set.

I've also created a new Balsa Man 2009 group pool which I invite all Balsa Man artists to contribute their build photos to. This pool can also be used to for pictures taken during the event itself.