We here at Balsa Man Headquarters (BMHQ) have been previously pondering about the potential problem for pantsless partyers and pontificating on proposing protocols to prohibit this practice. Luckily, Puny Pants Posse, aka The Society of Pants for the Wee, have come to the rescue. Here is their latest statement and grant request: 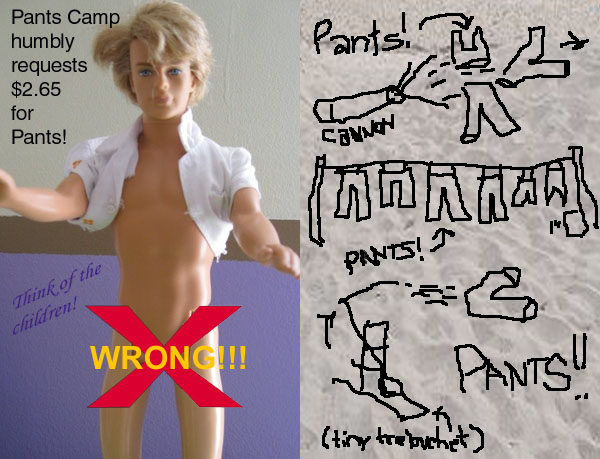 We, the Citizens who think Pants Are Necessary Things, Seriously! (PANTS) are concerned that tiny-person nudity is an epidemic sweeping the nation, causing wanton licentiousness, suggestive hoopla, blindness, and a corruption of the morals of our most precious asset, the children! Some little people have been known to lie around for days, weeks, nay sometimes months completely naked! I shudder to think what sort of lascivious thoughts might come unbidden to the unformed and malleable mind of a child who unwittingly happens upon such an obscene display! With just a tiny $2.69 donation for a tiny cause, you can ensure that such a scene will never mar the dignity and minuscule majesty that is Balsa Man! PANTS will fight tiny-person pantslessness with several specially-developed tools, including our PANTS Trebuchet and our PANTS Cannon, designed to render the pantsless incapable of exposing their hairless, bland crotches to the unguarded eyes of innocents. We will provide pants to any tiny-person without them, and will “convince” those who might be obstinate with the use of our arsenal.

In the name of decency,

Signed, The Puny Pants Posse, aka The Society of Pants for the Wee, aka What Part of Pants Don't You Understand!

At first, the BPAF art grant review committee was hesitant to award monetary funds to "theme camps," lest these "theme camps" become popular and get out of hand. However, we can all agree that pants are a necessary thing, and the word alone makes one giggle. Puny Pants Posse: APPROVED. pantspantspants! 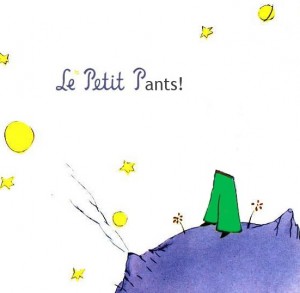 And if you do happen to leave your pants behind, the Puny Pants Posse would also like to invite you to "The Party In Our Pants" which will take place at Balsa Man, from 6:30 pm to 7:30 pm. Pantsocolodas will be served - BYO tiny reusable cup! Come admire the wall of tiny pants (pantitos?) and fire a pair of slacks from the pants trebuchet!