Balsa Man Regional was, by all accounts, a fabulous little event. At 5pm, in front of Ardent Heavy Industries (3:50 and Adapt), a crowd grew around the collection of tiny art that had yet to be unpacked. Earlier that day one of the Giant Man KCrew delivered an actual Toe of the Man. Rumor has it that "The Toe" is a leftover piece of lumber from That Other Man.

The population clearly wanted to be involved, and several volunteers quickly began building the L'il Trash Fence. We assembled The Toe with the L'il Balsa Man Head, not too far from the L'il Temple. We joked about having the man "from head to toe". Silliness abounded. Cali brought her Tiny Star Tree, which added considerable class and swank to the event. The Tiny Star Tree was an art piece with many adventures in its future, since it was the only piece to attend both the Regional and the actual Balsa Man event.

After a tiny portion of an hour, we began the arduous task of digging mini-trenches for the Tiny 2piR. However, our spoons wouldn't make a dent in the playa, so we decided to leave the fire effects above ground. That worked fine for everyone, because mere moments later a couple of tiny drunken slugs and a l'il raver penguin were on the platform. We're not sure where the tiny bottle of Jose Cuervo came from but it turns out everyone dances better when drunk.

The beauty of the Regional was the high level of participation from attendees. People started rearranging the tiny attendees (mostly slugs, penguins, and frogs). Smuckles von Smee and several of his slug friends were enjoying the event from the ground level.  A couple of Regional rangers kept order around the perimeter. Many photographers were taking photos with macro lenses. I doubled as media volunteer, and gave attendees carte blanche to document the heck out of the Regional. Of course we reminded everyone that in keeping with the spirit of the main event, BALSA MAN REGIONAL RETAINS ALL RIGHTS TO ALL THUMBNAILS OF ANY PHOTOGRAPHY, VIDEO, OR FILM THAT IS TAKEN AT THE EVENT. Several people with bullhorns helped narrate for those who weren't as close to the front lines.

About half an hour into the event, it could only be described as wonderful, beautiful chaos. The Garden of Tiny Delights evolved (as it should) beyond my initial designs. The attendees of the Regional moved the little frogs and penguins out to the trash fence; the zombie penguin was poised to attack the Temple; the Obelisk was placed out by L'il Mural. The S&M penguins embodied radical self-expression, and were causing quite a stir with their public flogging—scandalous! Tiny parachuters landed onto the playa, dust storms started kicking up thanks to Rubin's can of compressed air, and people started clamoring to burn things. Alas, one of the little parachuters landed funny, but after some quick thinking by Eddie (a Regional burner), a tiny helicopter came to medi-vac the injured little parachuter guy out of there. 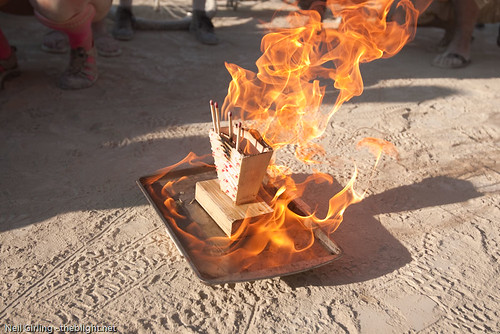 At 5:45 the event culminated with the burning of the L'il Man + Toe. Although he's made of balsa and kitchen matches, we decided to douse him in fuel just to make sure he'd really burn. All it took was a carefully aimed magnifying glass to set the thing ablaze. For a few minutes it was calm enough for one of the attendees to toast a marshmallow. Pretty soon a raucous group of people started chanting and dancing in a circle around the L'il Man, and one or two people even jumped over him.

Finally, at nearly 6, we burned the L'il Temple. The crowd grew solemn, with various people hushing and shushing and yelling DOWN IN FRONT. I believe a few tears were shed. We doused the structure in fuel, and used Edrabbit's flame effect/flame thrower to light it on fire. Laughter erupted as the flaming ball of temple flew ten feet off the platform onto the playa. I doubled as DPW and cleaned up all the ashes.

Lots of people exchanged hugs and vowed to come back next year, with more art, and more ideas. Perhaps we'll recruit a pyrotechnics expert to strap down the burning items.