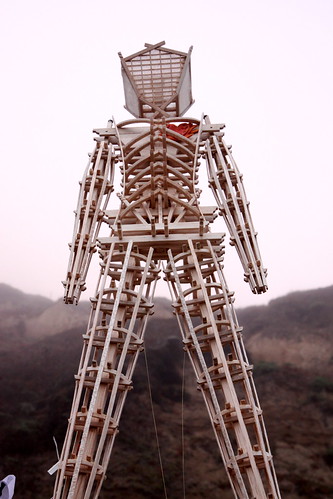 I'm sure you all know by now what an amazing success Balsa Man was. The Balsa Man himself may have arrived a tad late—due to amalgam of minor impediments so typical of art projects large and small—but once he arrived the small crowd of early arrivals cheered and the preparations began in earnest.

Ian, head of DTW, set up the Esplanade and directed others to install the tiny trash fence, Port-o-potties were installed, and Bryan generously jumped in last minute to help with artist placement. And boy was he needed as by this point, tiny artists were streaming in by the dozens: Puny Pants camp set themselves up next to the Balsa Center Cafe with Polar on the other side selling ice cubes for 15 2/3¢ a piece. The 1/16th Indian Taco stand set up shop over by the gate and the sound camps began to arrive. And in the center of this chaos, the Balsa Man KCrew got to work raising the Balsa Man.

When the Balsa Man was in position and lanterns on the base were light, the Balsa Man event was officially open. Tiny artists were still arriving, but now the crush of magnificently dressed participants began to arrive along the path set by the Burma Shave signs. 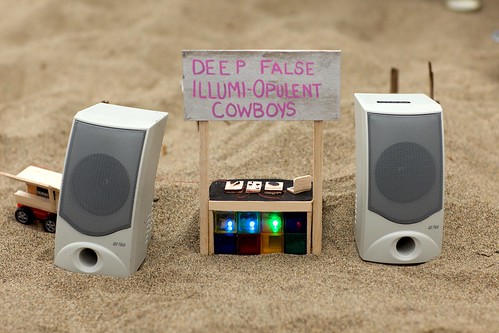 With hundreds of participants, the event was radiating with a spectacular energy. The place was teeming with creativity; everywhere you looked was a another small artistic gem waiting to be discovered. In fact, even though we started the event an hour earlier than last year, it was still nearly impossible to see all the art on display. We counted over fifty sculptures, a half dozen tiny art cars, and numerous other artists doing whatever it is that they do: just to pick one example, Josh & Naomi's cell tower was sanctioned by the UN. 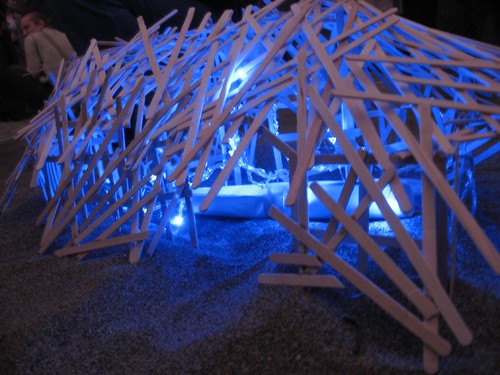 As the sun set and darkness settled on the beach, fires popped up sporadically across la playa as artists torched their work. Paul Addis burnt early as did Domokun. Soon the time came for the Balsa Man himself to be lit. Søren, the Lead Balsa Ranger and his crew set to work clearing the perimeter so that tiny artists could light their art and the Balsa Man KCrew could install the pyrotechnics as the tiny poi dancers entertained the crowd.

Of course not everything could be perfect, there was a little trouble raising the arms but once raised it was time for the main attraction.

With little ceremony, the Balsa Man was ignited and quickly turned to burning embers—and boy do I mean quick.

Seriously, you need to watch the burn in slow motion to really catch it in all it's flammable glory.

After the man was finished, everyone headed to the back of la playa near the trash fence to see their minor imperfect woes and pet peeves burn away into nothing. Then feeling a slight weight removed from their shoulders, the participants, with smiles on their faces, slowly dispersed into the foggy night…

I too couldn't help but smile. What an amazing year! Thank you all for making it the best Balsa Man yet!