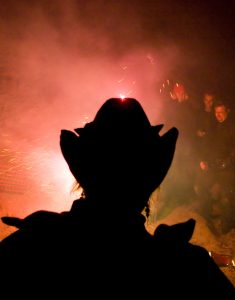 I, more than anyone, is surprised to be bringing Balsa Man back. The first Balsa Man in 2008 was done nearly on a whim, but I knew I had to do it again after seeing the smiles on everyone's faces in the meager light of the burning balsa.

After five solidly amazing years, in 2013, I made the final decision to not host another Balsa Man event and close down the Balsa Man Org office. I'd like to say it was a hard decision to make but it really wasn't. I had done all I had set out to do creatively with the event and more so. Popularity in it had grown and I would have had to make some drastic changes in order for it to continue. The creative spirit of Balsa Man was by that point fully infused in the world and I thought it was better to let it go — either to mutate or fade into pleasant memory.

I've gone on and done numerous other amazing art projects that I'm proud of in the past few years. Still I have thought about Balsa Man often. As have others, judging by how many people have said they would love to Balsa Man rise again. That's why when I got a call this past Spring from the Oakland Museum of California, I immediately knew it was time — time to bring my cutting boards and X-Acto knives out of storage!

Looking forward to see all you bitty balsa burners in Balsa Man 2020!