The Balsa Man organization has been going through some "Growing Pains" itself. After much discussion, consternation, and deliberation we have decided for the first time in the history of the event to require participants to have tickets to gain admittance.

I know many will cry "Balsa Man Has Sold Out!" — this is simply not true. We have made this decision in the best interests of the community. We feel that the optimal way to grow a stronger, better, more inclusive community is to restrict it to people who are willing to put their money where their participation is.

Tickets to Balsa Man 2011 are 10¢ and are available from any official Balsa Man representative — do not buy tickets from unofficial sources! Donors also receive complimentary tickets as part of their donor reward package. Tickets will be also for sale at the gate on a first come first served basis. We encourage you to buy early in case we run out!

Ticket Policy Addendum: No ticket is required for kids 12 and under since as tiny humans they are considered art.

We wanted this ticket to be a beautiful collectors item, but unfortunately due to the last minute nature of this decision our preferred designer was busy. As a result, we are stuck with this tragically mundane ticket design — seriously copperplate bold?!? We apologize and plan to design a better ticket next year. Don't worry we won't feel bad if you just throw out your 2011 ticket after the event is over. 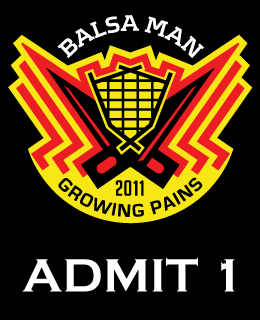 UPDATE: So it turns out that the "designer" we got to do the tickets—some guy's nephew's cousin's roommate or whatever—decided to surprise us my sending a completely different "hella cool" design to the printers. It's too late to change anything. The following is the resulting ticket design we are stuck with misspellings and all… I'm at a loss for words… or at least at a loss for words I'm allowed to post here.